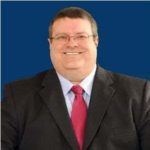 Rob grew up in Zanesville, the son of James (Jim) R. Sharrer and Lynda K. (Kendrick) Sharrer. He attended school at St. Thomas and Rosecrans before transferring to Zanesville High School his junior year to play football. He then attended Kenyon College in Gambier, Ohio where he was a starting fullback on the football team, member of Beta Theta Pi Fraternity and in charge of all intramural sports for the College. After graduating with a degree in Political Science he returned home to Zanesville to begin his career.

Rob is an owner and president of Varsity Title Services, LLC., which he founded in March of 2005. Located in Zanesville, they conduct real estate title searches, closing and escrow services and issue title insurance. Rob’s leadership has allowed Varsity to operate despite the downturn in the real estate, mortgage and title industries.

From a young age Rob’s parents instilled in him the importance of faith, family and community. He is a member of St. Thomas Aquinas Catholic Church and has served as a past President of the Zanesville Rotary Club, The Carr Center Board of Directors and the Zanesville Quarterback Club. He has also been involved with the Zanesville City Schools Hall of Fame, the Carr Center Cake Auction, the Festival of Trees, and many other community events and projects.

Rob and his wife, Susan, have been married for 22 years and are the proud parents to James III, 20 years old and Katherine (Kate), 18 years old. Both graduated from Zanesville City Schools and are busy with many activities.

Rob is excited to return to Council at Large and pledges to do his best to represent the citizens of Zanesville. He is very approachable and encourages residents and city employees to reach out to him to express their concerns and ideas for the betterment of our city. He can be reached at the Varsity Title Offices at 1901 Dresden Rd. or via his cell number at 740-586-0011.